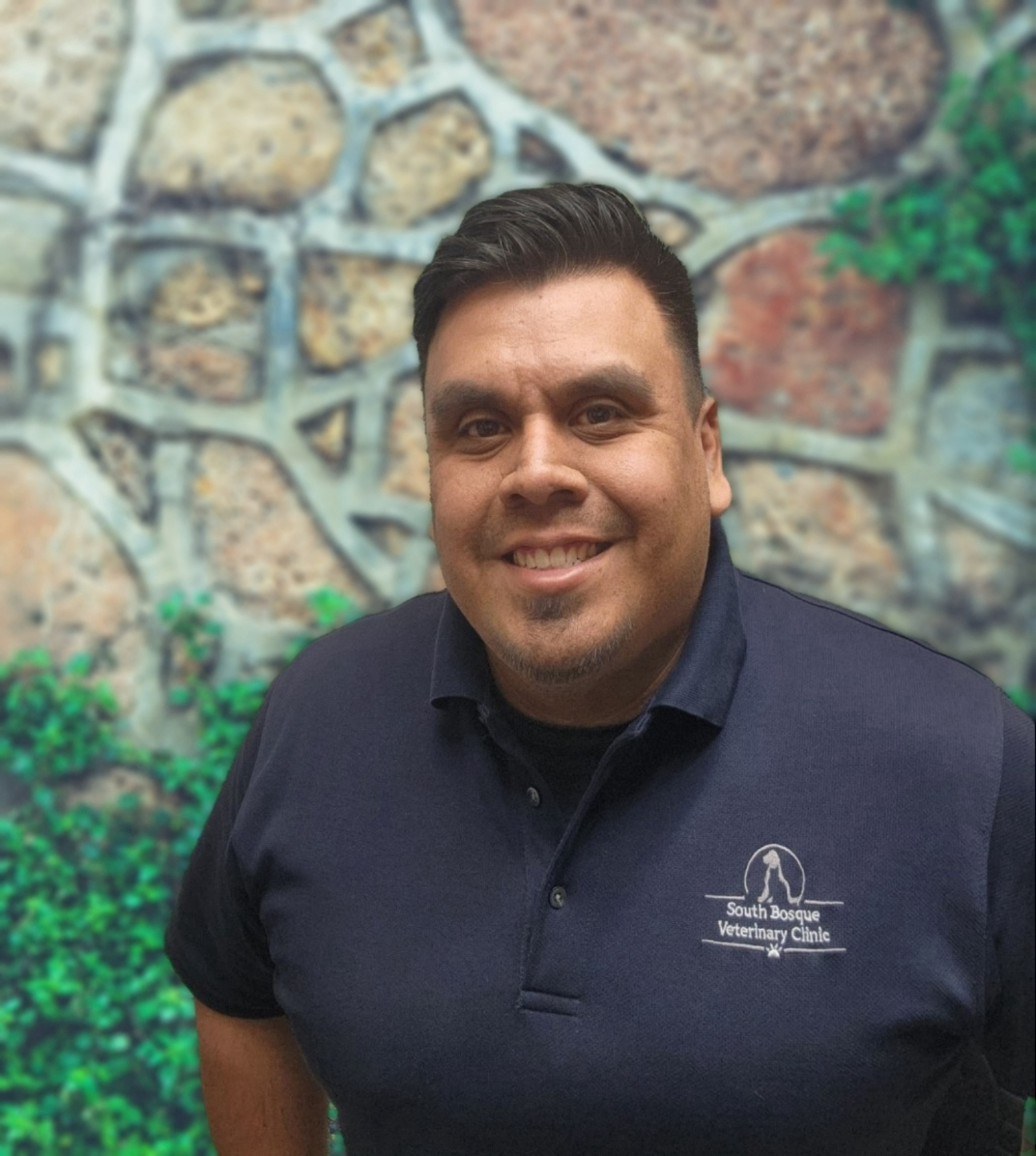 Thomas was born and raised in Waco, Texas. He graduated from University High School and later went on to McLennan Community College and obtained an Associates degree in Science. He then continued his education at Texas A&M University and earned a Bachelor of Animal Science. Thomas joined the SBVC team in 2012 as a Veterinary Technician and became the Practice Manager in 2016. Thomas married his wife Liz in May of 2010, and they have three beautiful children as well as two dogs (Chato and Shelby) and a cat named Oreo. 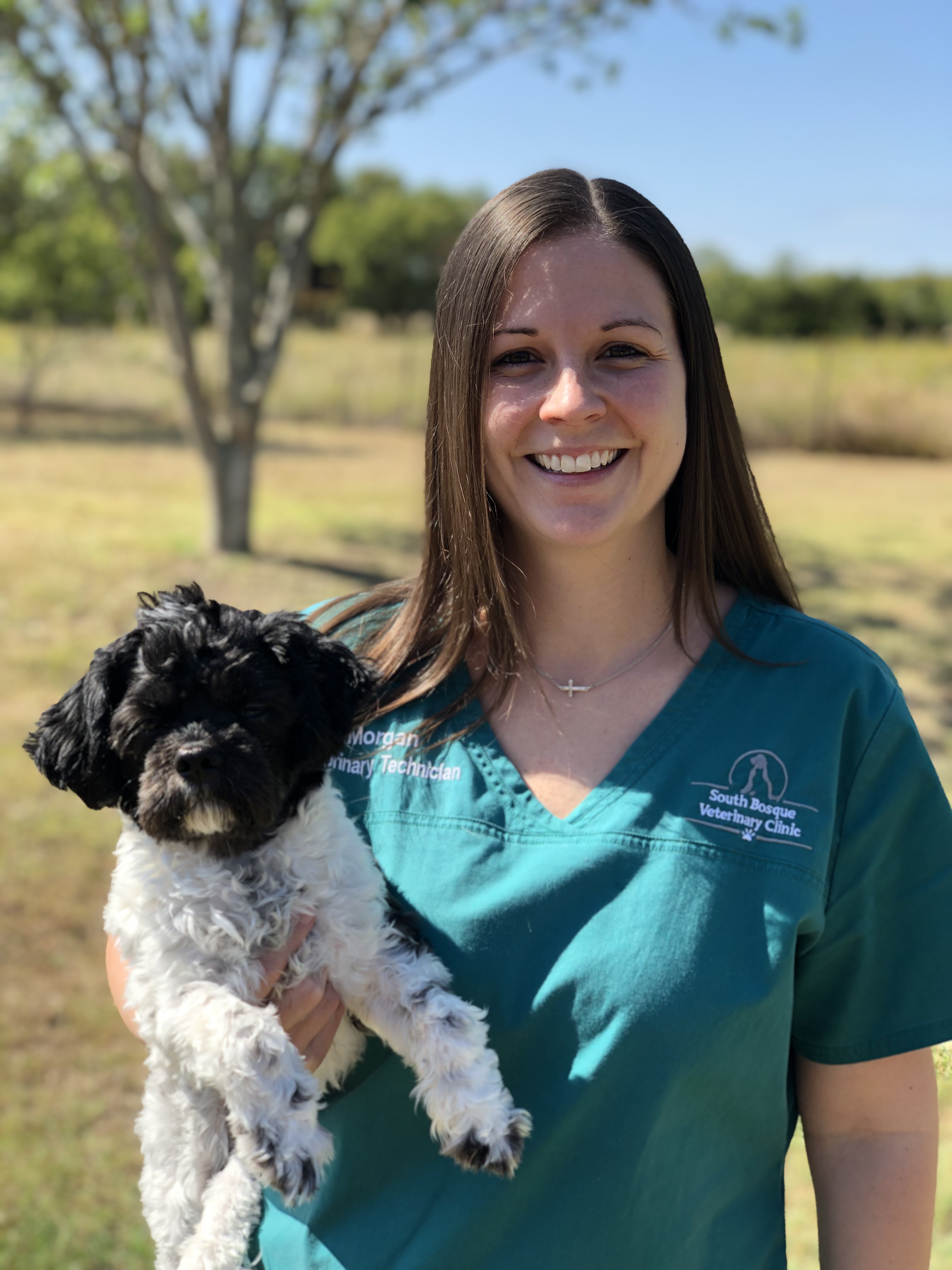 Morgan Kiphen is originally from Bruceville-Eddy, Texas. After high school Morgan attended McLennan Community College and graduated from the Veterinarian Technician program in 2012. Soon after graduating Morgan started her first job as a Veterinary Technician at South Bosque Veterinary Clinic and has loved it ever since. Morgan married my husband Ryan Kiphen in 2016 and together we have one daughter named Riley Kiphen. Morgan also has one dog named Oakley and one cat named Duncan. As a family the Kiphens love being outside, playing and watching sports. 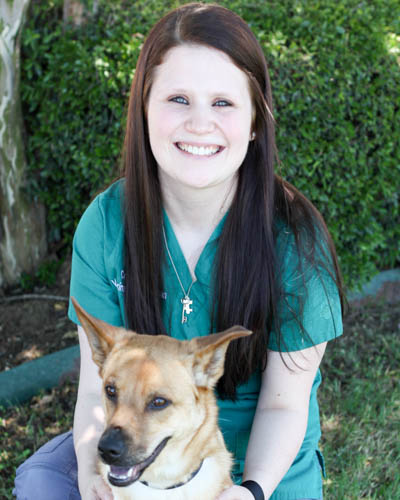 Courtney was born and raised in Waco and graduated from Connally High School in 2010. She joined the SBVC team full time in August 2014 after graduating with her Associates Degree in Veterinary Technology from MCC. Courtney has plans to continue her education at Tarleton State in pursuit of her Bachelor’s degree in Veterinary Technology. Courtney married her husband Tyler in March 2015. She enjoys reading and watching movies (especially Disney movies) in her spare time. 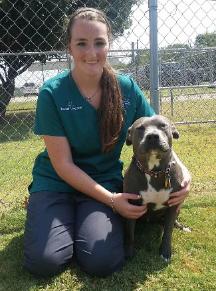 Erin was born in Waco and has lived here her whole life and joined the SBVC team in July of 2015.She graduated from Bruceville-Eddy High School in 2013 and is graduated the MCC Veterinary Technology Program in 2016. She previously worked at a dog rescue and is very passionate about her work with animals. Erin married her husband Drake shortly after graduation. She has three dogs named Beau, Ronald and Tank. In her free time Erin loves to spend time with her family and all of her fur babies. 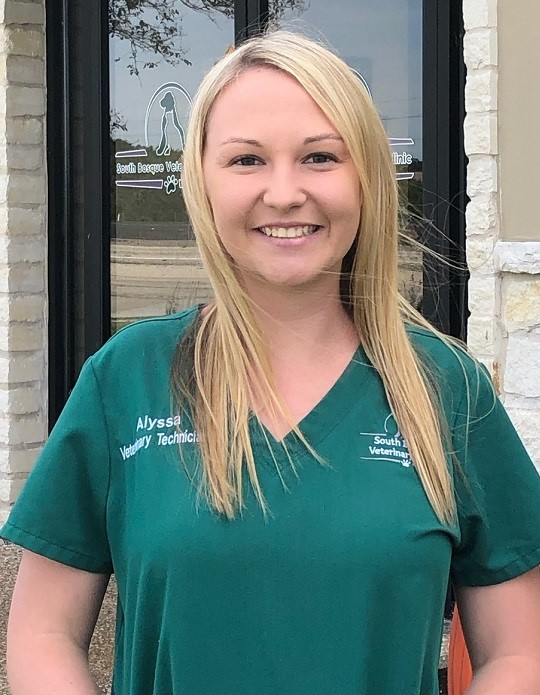 Alyssa was born and raised in West, Texas. She attended the Veterinary Technology Program at McLennan Community College and graduated in 2018. Alyssa has two dogs, Max and Charlie, and a cat named Mayloo.In her spare time, Alyssa loves to spend time with her friends and family. Alyssa also loves listening to musing and watching movies. 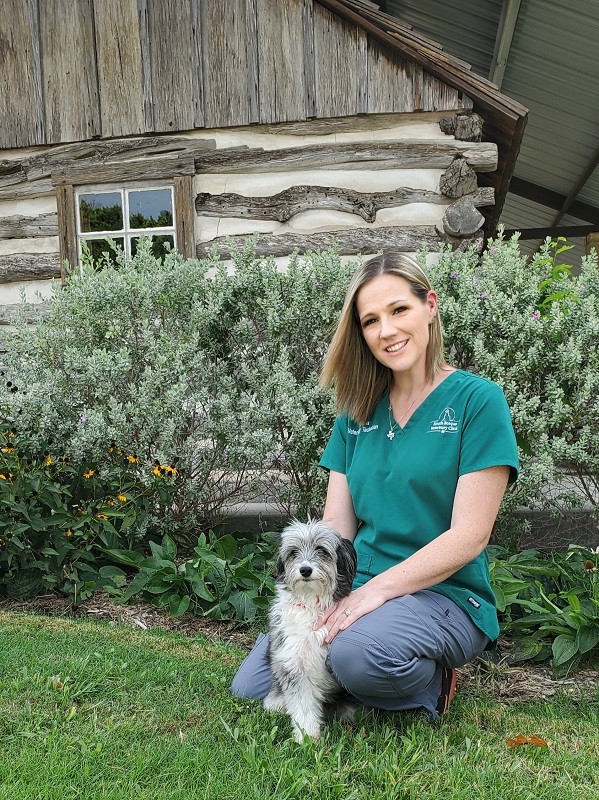 Kira Megason is originally from Fort Worth, Texas and has recently moved from East Texas to the Waco area. Kira’s love of caring for animals started when she was 14 and had to care for her sick tortoise, Lucy, she has been caring for animals ever since. Kira is married with 3 children and has 3 dogs and the best cat in the world, Grands Biscuits. As a family the Megason’s love going to any outdoor activity and watching their kids play sports. 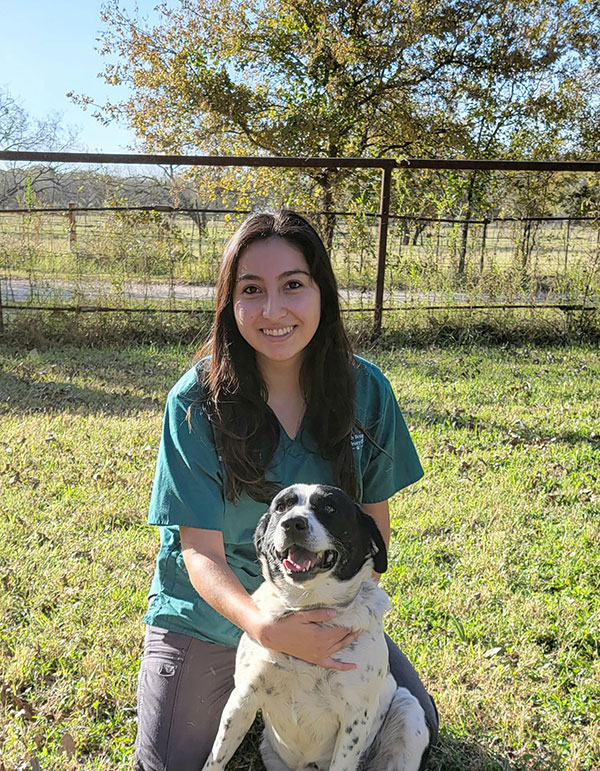 Wendy was born in South Carolina raised there for 3 years before moving to Eastland, Texas to be closer to family. Her love for animals has grown since she was 7 years old when her dad worked at a Ranch with horses. Her hobbies include when she’s not working you can find wendy making terrariums, tending to her plants, and long hikes with her two dogs. 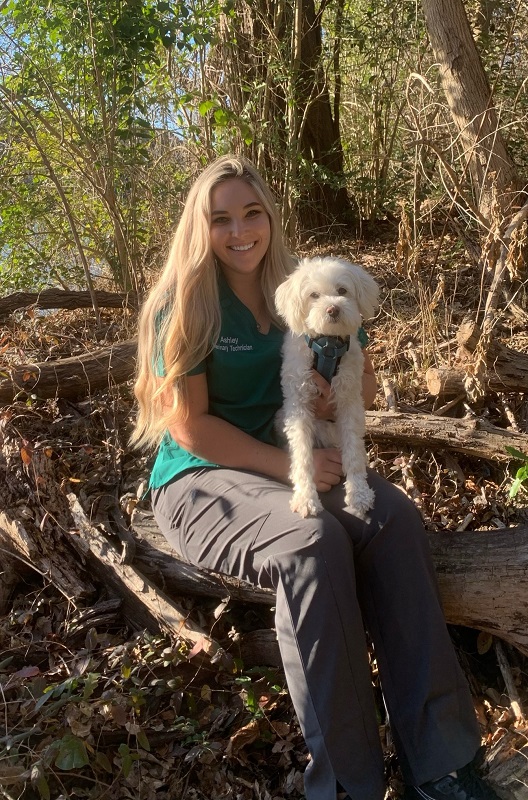 Ashley graduated college with her degree in equine business management and shortly after that she moved to Waco, TX from San Diego, CA. She loves everything outdoors like camping, hiking, and off-roading. Her favorite type of music is country music. She has a dog named Daisy and a cat named Bodie. In her free time she is either with family, friends, or most likely watching hallmark movies with Daisy.

Emily was born and raised in Upstate New York and moved to Texas 10 years ago. Growing up, Emily and her family raised and showed steers and heifers with much success. This made her decide on a career in veterinary medicine.

Emily graduated from Vet Tech Institute of Houston in April 2021, became licensed and joined the South Bosque Veterinary Clinic family shortly thereafter. Emily recently married her husband, Kyle, and together they have one dog, Cooper Wayne, whom they love to take camping, fishing and to the dirt track races. In her free time Emily loves to spend time with her family, cook, craft and watch movies. Emily is proud to be a licensed veterinary technician and loves her interacting with all pants and educating clients. 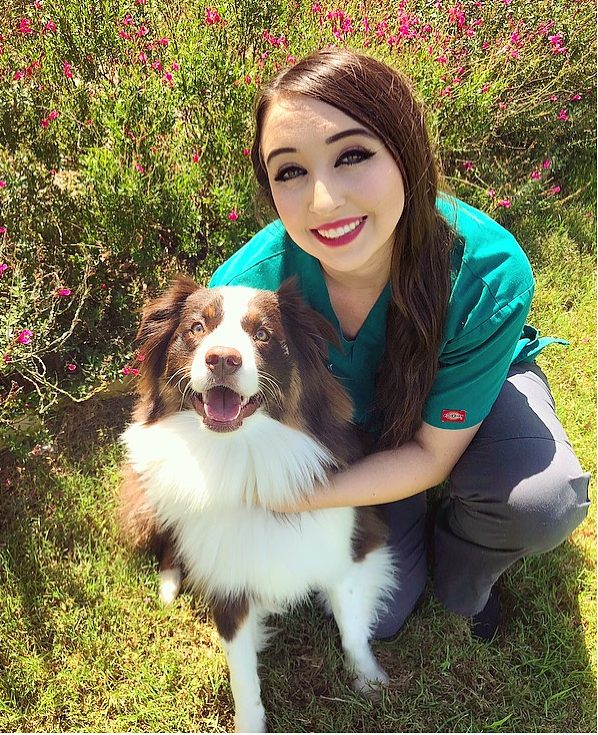 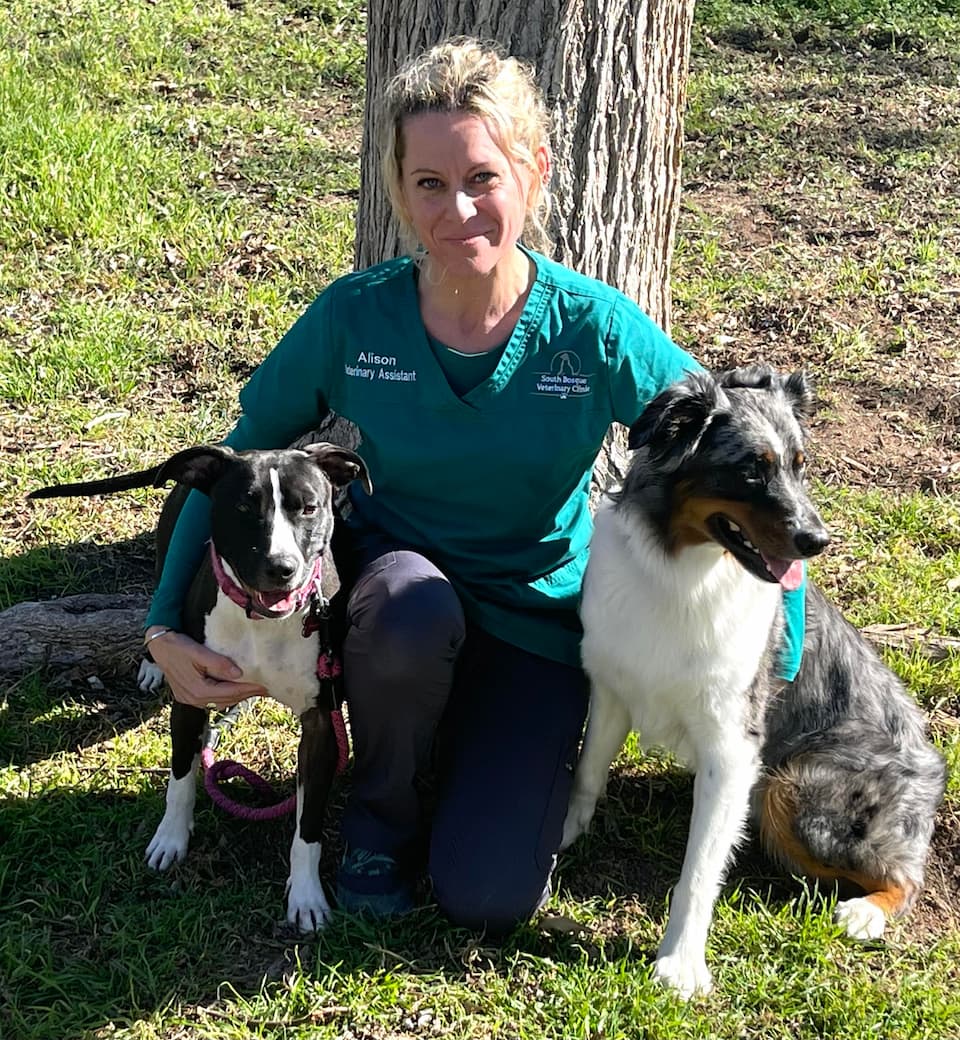 Alison is a recent transplant from New York arriving the summer of 2022 after making big life changes. As a Senior living & care professional, she decided to leave the human world to pursue her passion for animals. Currently working towards her vet tech degree, Alison’s love for Animals has followed her since she was a child. She’s a proud mother of three amazing adult children. In her spare time you can find her enjoying her family, running, playing soccer, riding a Harley with her better half, attending concerts and football games, or doing anything she can outdoors. Her two rescues, Natasha and Blue, help keep her busy and active. 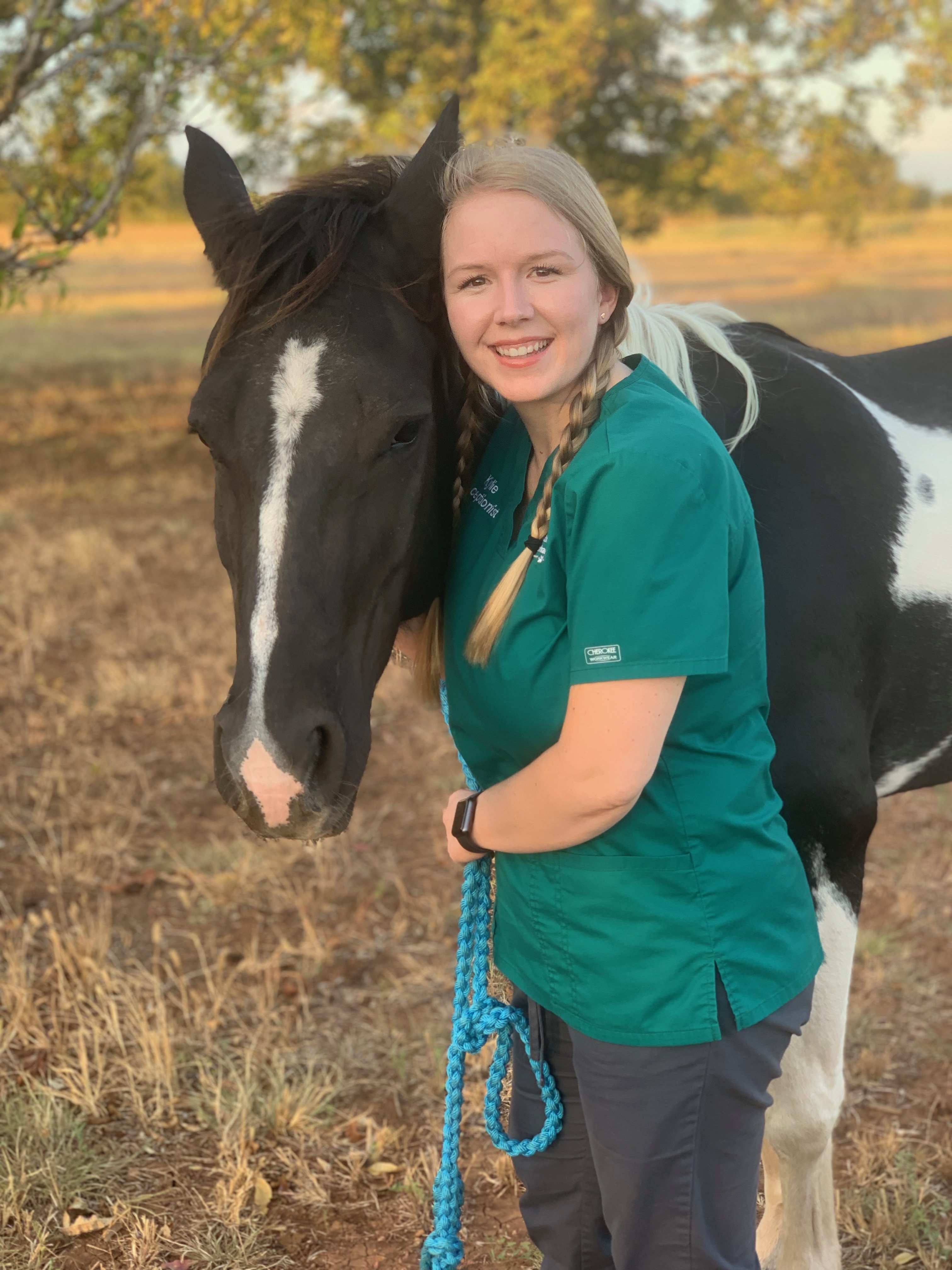 Kylie was born in North Carolina and moved to Waco in 2006 to be closer to family. Kylie graduated from the University of Texas of the Permian Basin with a Bachelor’s in History. Kylie’s love for animals drew her to SBVC. Kylie has two dogs, two goats, one horse, and many chickens. 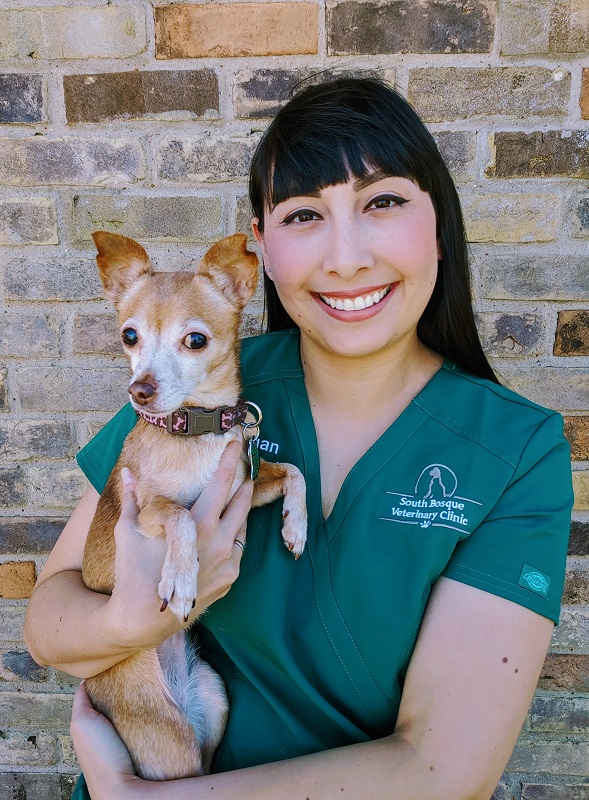 Meagan relocated to Waco after her husband left the military and got accepted to Baylor University. Meagan is a graduate of the Aveda Institute in Tucson, Arizona and a former Salon Manager. She is originally from San Antonio, Texas and has 2 spoiled chihuahuas. Meagan also loves to cook and try new food. 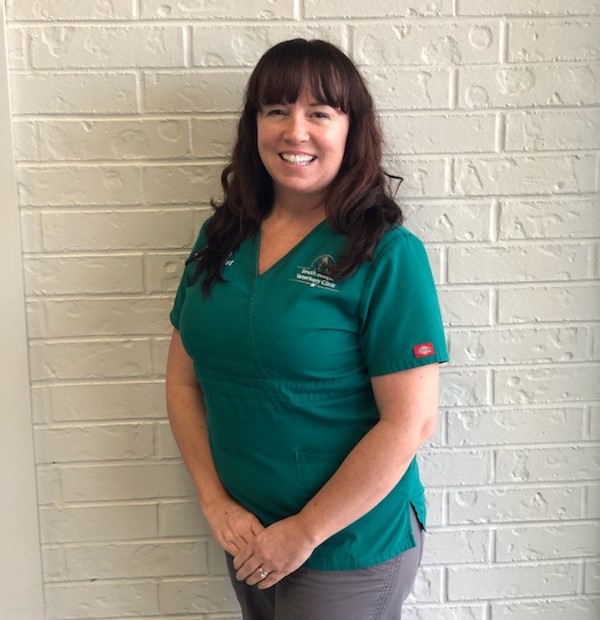 Shannan was born and raised in the Pacific Northwest. Shannan, her husband, and their daughter moved to Hawaii in 2005. They were able to enjoy the beautiful island of Maui for 15 years. After Shannan’s husband retired from law enforcement, they chose to make Texas their new home. 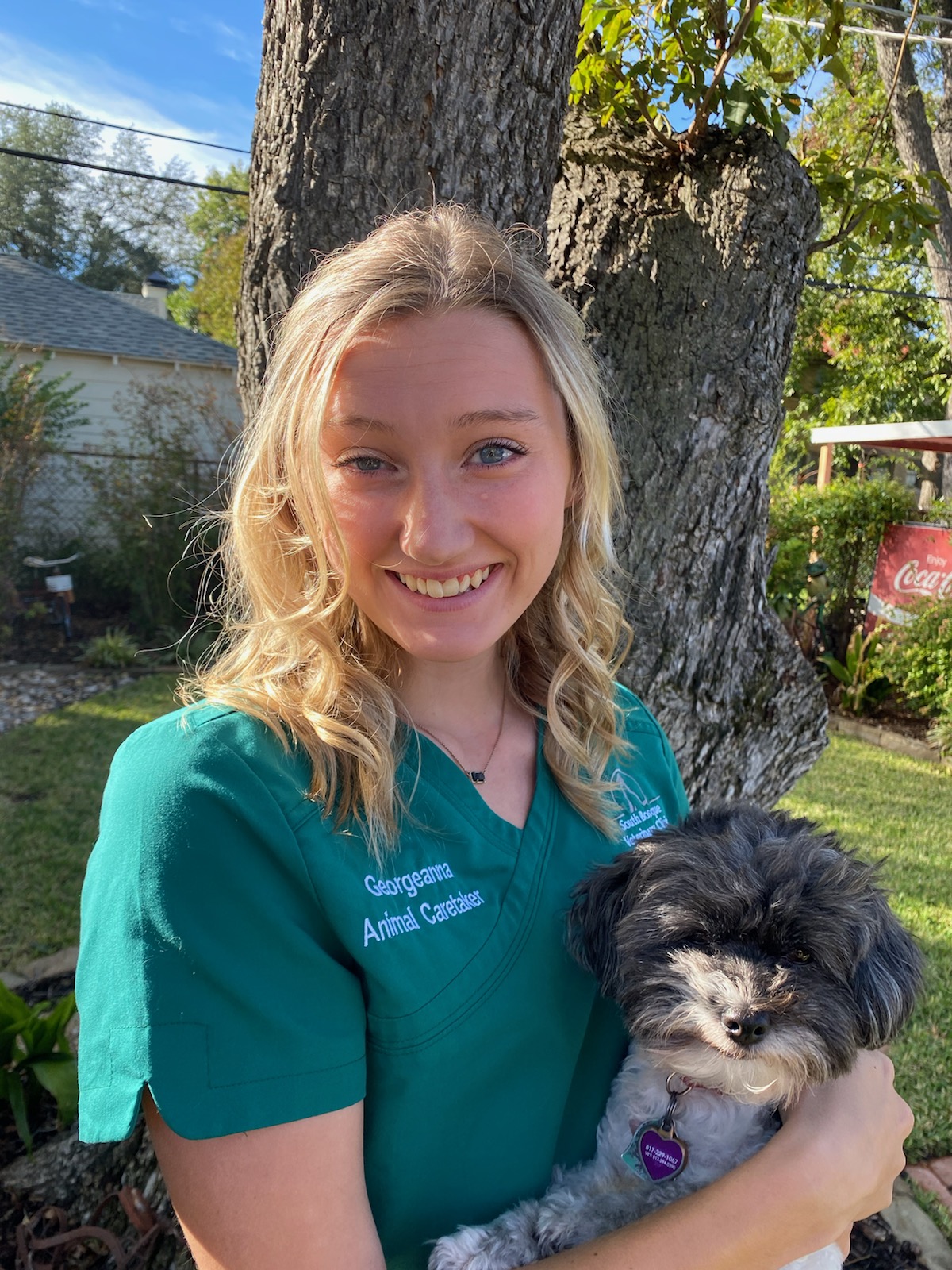 Georgeanna is from North Little Rock, Arkansas. Baylor University brought her to Waco where she is studying Health Science on the pre-vet track. In her free time for Georgeanna enjoys listening to music, hanging out with friends and being outdoors and active. Georgeanna has three dogs back home, two Australian shepherds (Malli and Guinness) and the three- legged chihuahua named Trio. 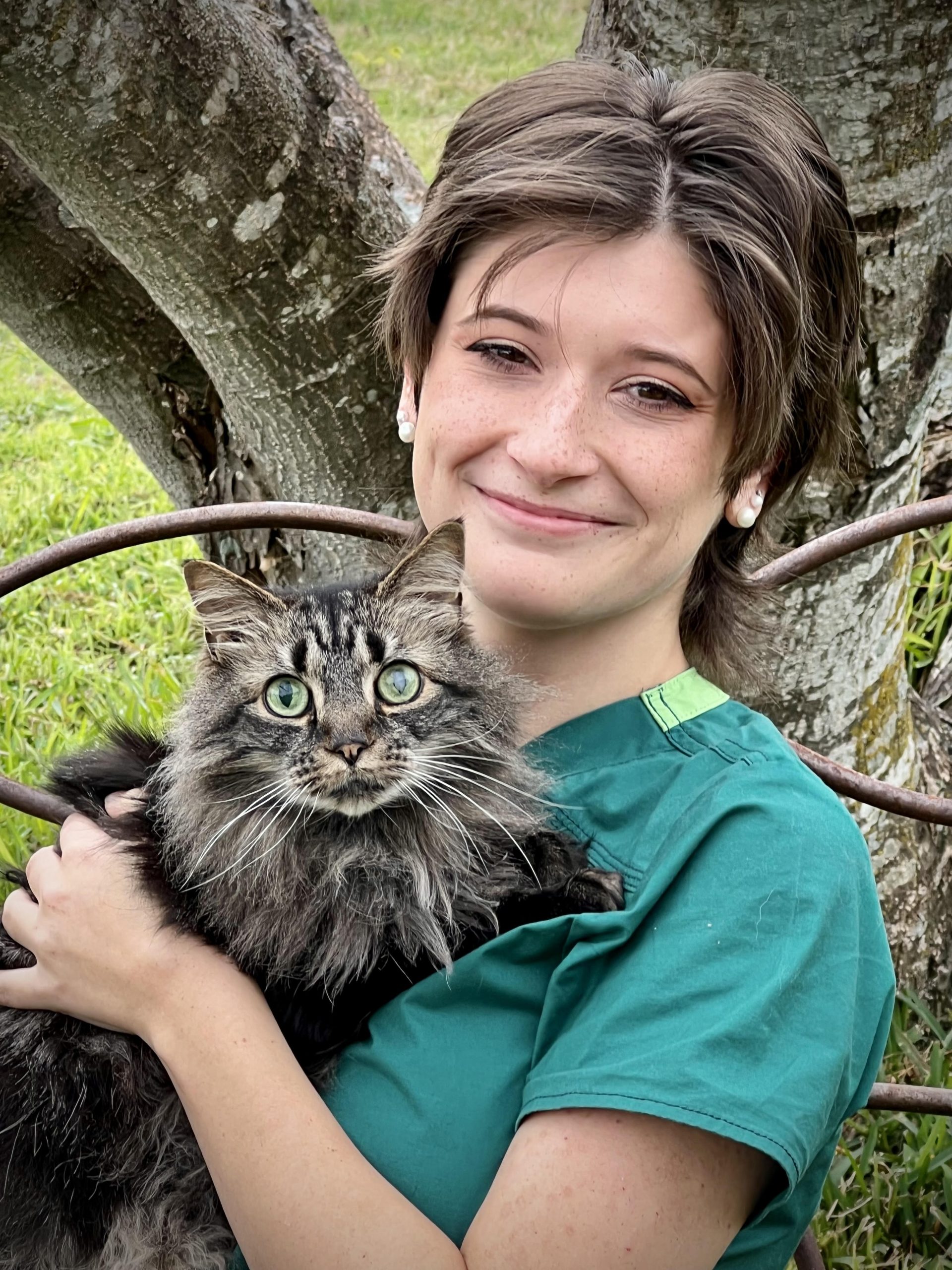 Danielle lived in Texarkana, TX where she began working with animals her senior year of high school. She attended A&M University with a major in Biology and Psychology before moving to Waco to be with family. She likes to ride horses, crochet, and play games in her spare time. Danielle has 4 cats and 2 dogs who she loves to spoil, and a horse who has been with her though many riding competitions but now enjoys a happy retirement.

Alissa was born and raised in Waco, and has always had a heart for animals. At a young age, she began rescuing them and has assisted in the rescue of 200+ animals. Many of these rescues were medical cases, some severe, which helped her gain experience with animals. Her love for dogs and cats brought her to the SBVC team! Outside of work, Alissa enjoys seeing movies with her boyfriend, Mike, and stays entertained by their 7 dogs.