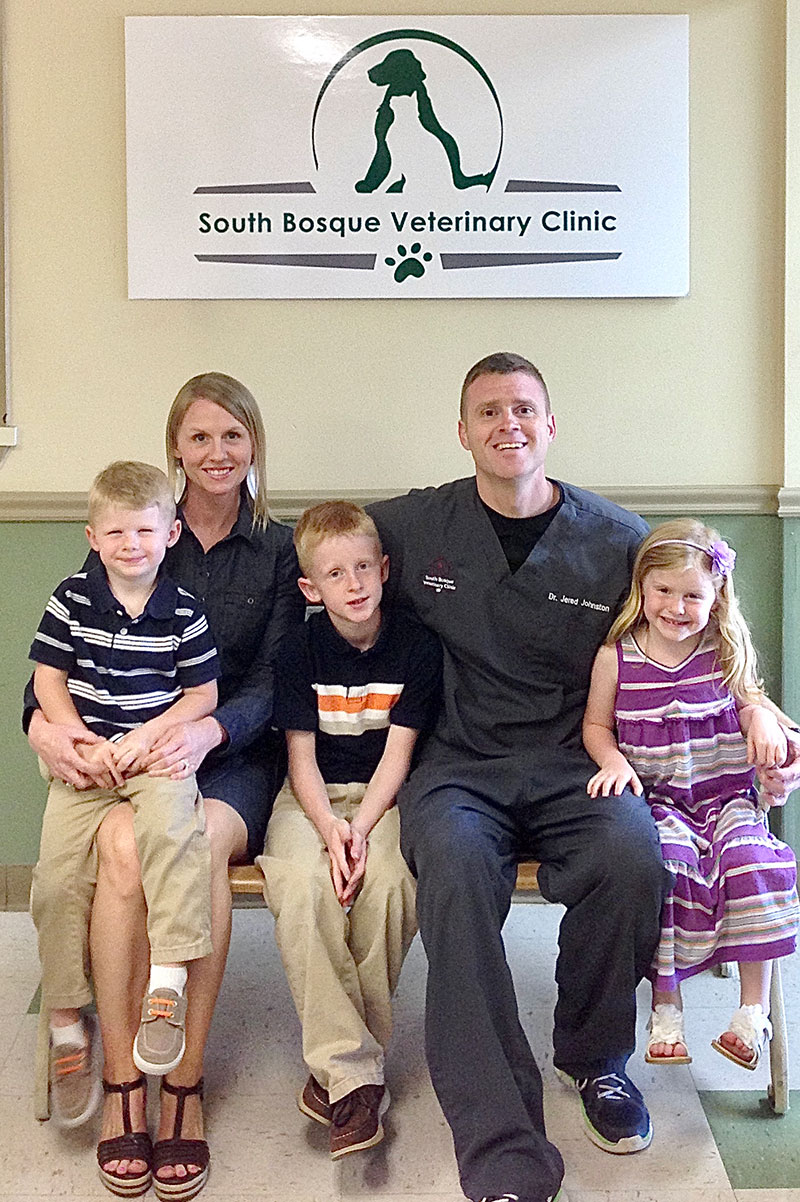 Dr. Johnston joined the team at South Bosque as a full time associate veterinarian in 2007 and took over as the practice owner in 2015. He is excited about the future of South Bosque and looks forward to offering the best veterinary care possible in central Texas. Dr. Johnston is married to Holly, a stay-at- home mom, who cares for their sons, Parker and Conner, and their daughter, Ainsley. Their family also includes two dogs, Finn and Duncan, their cat Sir Norman the IV and one hamster, Sprinkles. 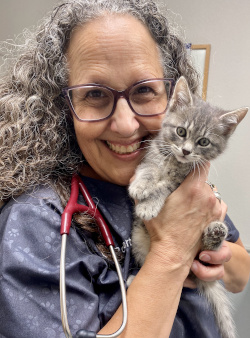 Dr. Robert was born in East Texas and raised in the Dallas area. She attended Richland College of Dallas County for two years before transferring to Texas A&M University. Dr. Robert graduated in 1988 with a Bachelor of Science in Animal Science. She continued on to veterinary school at Texas A&M and graduated in 1994.

Dr. Robert joined the team at South Bosque in 2002 on a part-time basis, but shortly after joining she took on a full-time associate role. She believes that veterinary medicine has advanced greatly since she earned her Doctorate of Veterinary Medicine, but the need for human touch and compassion with animals has stayed the same. She strives to remember that compassion and love need to be included when dealing with each patient and family. Dr. Robert married her husband Brian in 1992. They have two adult children, William and Rebekah. They have 3 labradors (Howdy, Bishop, and Abby) and 2 cats (Minerva & Simon). 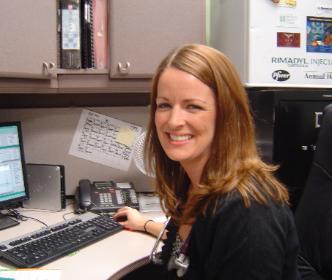 Dr. Ferguson was born in Columbus, Ohio, but grew up in Brownsville, Texas. She received her undergraduate degree in Biology from Rice University in 2005. She then earned her veterinary degree from Texas A&M University in 2009.

Dr. Ferguson began her veterinary career working at a 24 hour animal hospital in Houston. She married her husband, Todd, in May 2011 and the two recently moved to Waco after Todd was accepted into a doctoral program at Baylor.

Dr. Ferguson is excited to be a part of the team at SBVC as a full-time associate. She is dedicated to providing excellent medical care to your pets because she knows they are important members of your family, too! She and her husband reside in Robinson with their two cats, Ellie and Ginny. 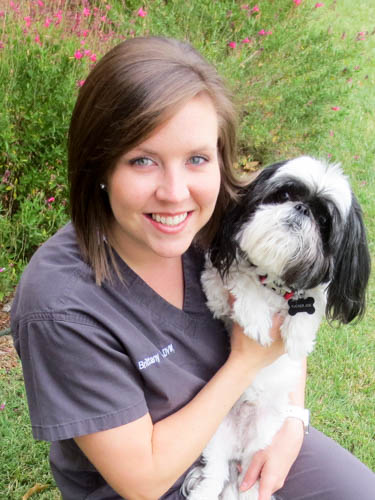 Dr. Taylor was born and raised in McAllen, Texas, where she grew up playing club soccer and raising both market and breeding goats in the 4-H and FFA. At a young age she developed a passion for working with animals and had dreams of one day becoming a veterinarian. She began her journey at Texas A&M, where she received a Bachelor of Animal Science in 2010 and then went on to graduate from Texas A&M University’s College of Veterinary Medicine as a Doctor of Veterinary Medicine in 2014. She spent her first year in practice in a small town southwest of Fort Worth where she treated and cared for both small and large animals. Dr. Taylor’s practice interests include preventive medicine, internal medicine, and surgery. In her free time she enjoys the outdoors, photography, and spending time with her family and her pets; her dogs, Tucker Joe and Ellie Mae and her cats, Cooper Lane and Minnie Pearl.

Dr. Taylor is passionate about providing the best possible medicine for your pets and will strive to continue the exceptional service and care that you have come to know and expect at SBVC. 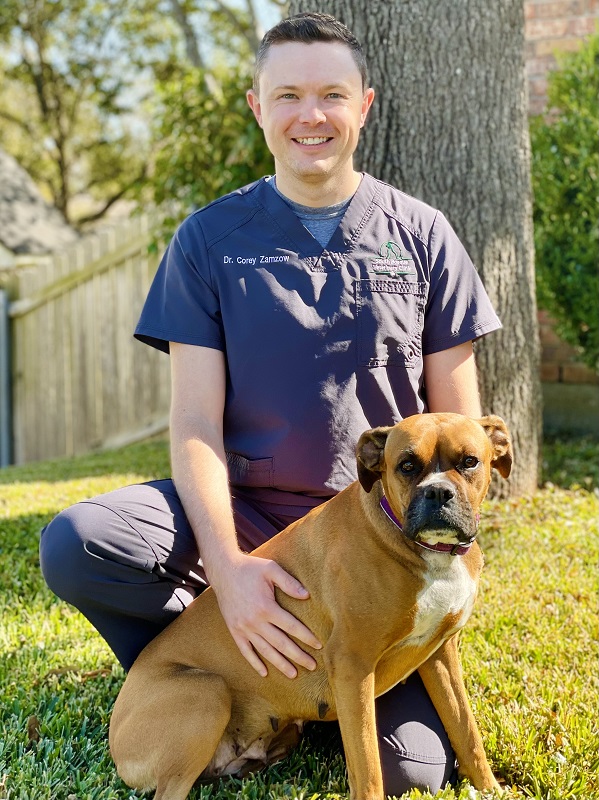 Dr. Zamzow was born and raised in the great state of Texas, mostly around the Austin area. He attended Baylor University for his undergraduate degree and graduated in 2011 with a Bachelor of Arts in Medical Humanities with a minor in Chemistry.

Dr. Zamzow started working in veterinary clinics when he was just 16 years old. During his senior year at Baylor, he began working at South Bosque Veterinary Clinic as a receptionist and technician while completing his undergraduate coursework. He then attended the University of Missouri College of Veterinary Medicine and graduated in 2016.

Dr. Zamzow loves being a part of the outstanding team at the South Bosque Veterinary Clinic. He is passionate about caring for animals through all stages of life and views veterinary medicine as an opportunity to not only be a part of your pet’s life but your family as well. Dr. Zamzow and his wife, Rachel, live in the great city of Waco with their two sons, Eli & Joel, and their two cats, Lulabee and Griffin. 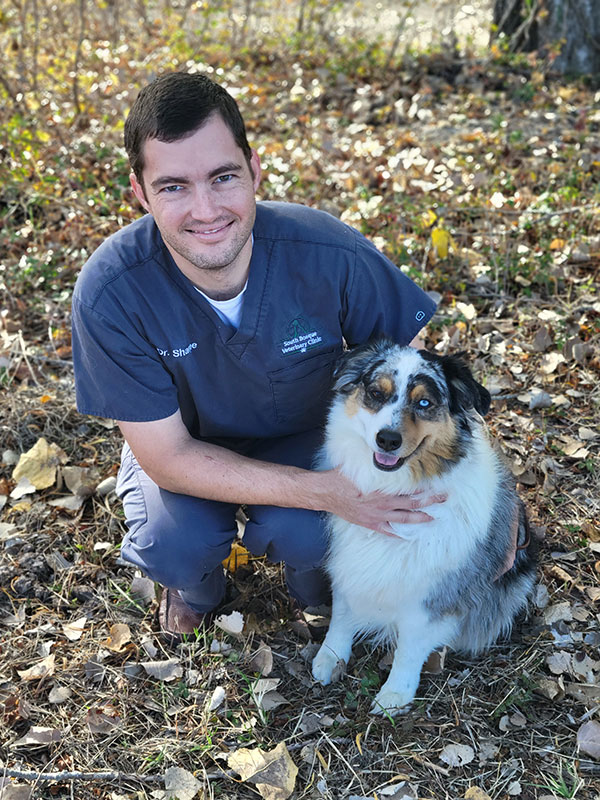 Dr. Sharpe was born in Dallas but raised on a ranch in Fredericksburg, Texas. His love for veterinary medicine developed while working as a technician at a mixed animal practice for almost 8 years. He graduated from Baylor University with a Bachelor of Science in Biology in 2014 and from Texas A&M University’s College of Veterinary Medicine in 2018. He began his career working at a mixed animal clinic in Belton.

Dr. Sharpe is dedicated to providing top quality and compassionate care to all animals he has the privilege of looking after. He loves learning and enjoys implementing the most current and research-based treatment methods. He is passionate about educating owners on the well being of their fur-family members as well as preventative care and chronic condition maintenance. He enjoys many types of surgical procedures on both dogs and cats.

Dr. Sharpe his wife, Rebecca, and son Timothy live on a small property with their two dogs (Teddy and Luke), two horses (Chief and Honey-Mae), and small flock of chickens. Dr. Sharpe’s hobbies include woodworking, playing the guitar and piano, running, and spending time with his family and his animals.